Killing the Angel magazine gets ink:

December 2016: The Review Review features KTA in an “Editors on What They’re Grateful For” blog post.

August 27, 2016: The Pascack Press featured a print press release for “After the Ballet”, out from Killing the Angel Press. 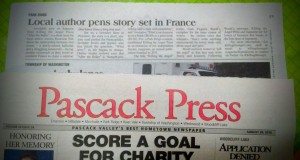 July 30, 2015: “How to Kill Your Angels” is featured as part of the launch of CLMP‘s Front Porch Commons.

July 14, 2015: KTA is featured in an interview with The Review Review.

October 26, 2014: Props to FDU for celebrating the accomplishments of its MFA alum (in this case, Cory Johnston!).

September 9, 2013: Blogging Woolf: Killing the Angel . . . again! “With so many print literary journals folding up their tents and going away, I was happy to see that Jessica Rosevear has just published the second issue of Killing the Angel.” –Alice Lowe

February 13, 2013 on Chicago Now‘s Stop and Blog the Roses: Killing the Angel: A Writing Must. “… here’s to my friend… who has started a literary magazine called–don’t you love this–Killing the Angel.” —Fern Ronay

October 29, 2012 on Alice Lowe Blogs: Two New Essays in Print. “I commend Matt Ward of Skive and Jessica Rosevear of Killing the Angel because they’re brave and brazen, bucking the digital tide, and I have these two lovely specimens in front of me as a result.” –Alice Lowe